Taghardait (Ghardaia) best visit place, one among the palaces of the M'zab Valley   500 kilometers south of Algeria 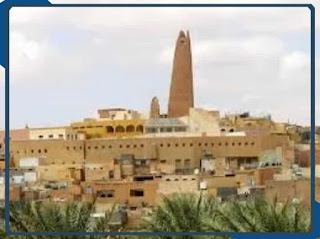 overlooks mud palaces of quite 1000 years old from a rocky plateau. This area of ​​the state of Ghardaia is understood because the M'zab Valley, which is assessed as a world heritage by the "UNESCO" organization, and these palaces represent one among the masterpieces of engineering within the world.  * The Holy Trio *   The palaces mean villages within the local language, and therefore the palaces of the M'zab Valley are far aside from one another, but their architecture is that the same, as its philosophy is predicated on a "sacred triad": the mosque, the market and therefore the house because the centers during which the human moves. the primary thing that's inbuilt the palace is that the mosque, during which people gather, so you discover one mosque in every palace, then comes the market, and it's the backbone of the economy in every palace and in it people also gather, and therefore the engineers made sure that the market is on the brink of the mosque so as to form it easier for traders and shoppers  Prayer.   Then the homes come and that they are similar in design, so their walls are high and that they are open from the within, so as to permit air and lightweight to flow, in order that they don't need lamps or coolers except during a only a few times, and therefore the houses are designed very closely, which makes the alleys somewhat narrow, and therefore the houses are cold  Summer and warm winter.

* The seven palaces *   The Tajnent Palace is that the oldest of the seven palaces, and its name means the low place, the second palace is at Bunur and is attributed to the Al-Masabi tribe, which built and inhabited the town within the past. At Bunur is distinguished by being built on a really impregnable mound of rock.   The third of the palaces is Tegrdait, which is that the first city to be seen upon arrival from the north and is understood today as Ghardaia, the fourth of the palaces is at Isejn, which is one among the capitals of the scientific and non secular heritage, which preserved its authenticity and its wall still standing today, and therefore the fifth may be a palace coming to Melisht and it's located on a high plateau between Tardajit and are available Ezgen, the viewer from her can see Thethe palaces of Tegerdait, Aate Ezgen and Ait Bonnur. (sixth palace is Tigrar, mentioned as al-Qarara, meaning the oval mountains bordered by small plains during which the water settles, and it had been built on muddy land) unlike other palaces built on Rockies and famous for its vast oasis, and eventually, the Palace of Ibergan, referred to as Barrian. aside from these palaces, which are still vibrant with life, many other palaces have ceased to exist and became ruins, among them: Fine we were deceived, and that i fell crazy with Ouedai, Morki and Baba Saad. 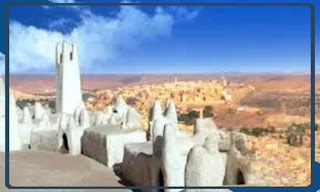 * Mzab in celebrity writings *   The scholar Abd al-Rahman Ibn Khaldun wrote in his book “The Lesson and therefore the Divan of the start and therefore the News” on the Mzab Valley, and among the mentions of “the palaces of Musab (Mzab), its inhabitants of this era from Bani Abd al-Wad, Bani Tujin, Musab, and Bani Zardal, among those that joined them from the peoples of Zenata, albeit their fame is exclusive.  Infected. "   As for the French orientalist Cluj Pavard, he was dazzled by the sweetness of the M'zab Valley, and he described it in his book "Lights of M'zab", saying, (I visited M'zab at the beginning of this year one among the seventies, then returned to him within the spring, then went twice within the summer. Mzab features a special charm that pulls me from the depths of Paris. As a photographer, I even haven't seen all of the countries of the West more beautiful than Mzab ).The French engineer André River , born in 1919, was influenced by the architecture of the palaces of the M'zab Valley, so he wrote his book entitled "Mzab studied in architecture," and from what came within the book, "When i'm going to the Gutter Valley I meditate and be silent."