* Irrigation in the M'zab Valley:

The Mozabite farmers irrigate through wells, which are almost the only source of water in the M'zab Valley, and in all the desert regions of the world, as previously mentioned, as well as on the valley surrounding the city, and the wells are of several types, and the methods of extracting water from them are diverse. like that . 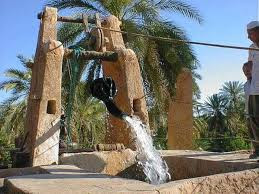 Types of wells and methods of water extraction:

1- The traditional method: the water is drained from the well in the M’zab valley, by means of a camel, donkey or mule, which attracts the bucket by means of two ropes that pass on two pulleys, by following an inclined path to reduce the hardship of attraction. This load ranges between twenty and thirty liters, and the rate of displacement is two times per minute, and the donkey drains 3 cubic meters of water per hour, and the farmer only enjoys music  The two wheels or what he repeats from the verses of the Qur’an, and some elderly people still use this method to this day, to enjoy it

-The modern method: It is the method adopted today, in all parts of the world, and it depends on the use of pumps and electric and gasoline engines.  , and 350 vertical pumps from 1944 to 1962 AD, and these operations continued after that to include all gutter wells, as the number of conventional wells shrank sharply today.  Irrigation .

method: The method of irrigating the oases in the M’zab valley is a very simple method, which relies on digging the streams that run between the trees and palms and transfer water to them.  The main stream is through a large stream at the bottom of the basin, and from it to the secondary streams that pass over the entire forest.