Lake Manea, located 270 km from the capital of Ghardaia, abounds with beautiful landscapes within the Sebkha Lake Reserve, classified as a wet area within the south of the El Manea district and with virgin natural treasures, preceded by the biodiversity of migratory birds. 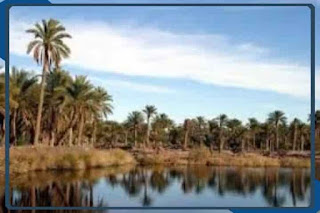 Lake (Mashgardel), which is that the local name consistent with the people of the region and consistent with the geographical map called (Mashgarden), which was an excellent lake at the start of the fourth era then dried up as we note that this site was formed within the second era within the Cretaceous during the Turonian period and after the decline of the traditional seas During the later geological eras, it became an excellent lake within the fourth era , as mentioned. the location may be a large depression surrounded by a thick belt of sedimentary sand dunes of the fourth era, topped by modern windy sand dunes and increasing from northwest to east along a length of about 11 km. This basin borders From the north, an irregular limestone cliff topped by windy sand dunes. the world of the Mashkardel lake basin is estimated at 2000 hectares, and it's 30 km faraway from Al-Manea to the south, that is, near the agricultural ocean of Hassi El Taweel, which is administratively affiliated to the municipality of Hassi El Gara. Access to the present site is extremely difficult thanks to the partial structure of the soil, which is of a kind Al-Fashash is any fine sandy soil mixed with fine particles of plaster and it's impossible to maneuver by car or walk on foot because the soil is submerged within the feet to the knee, which makes the He advanced within the place very tired and exhausted at a distance of two kilometers from the southern side, also as due to the sand belt that naturally prevents progress and access to the lake because the peak of the sand belt is about 40 meters and its thickness is about 30 meters, but there's another path to the north through the Hassi Ghanem area faraway from In the north, it's quite 60 km long, but it's a difficult path due to its sand dunes and large basins of sand and plaster, where it's preferable to climb over the rocky cliff or walk alongside it cautiously. consistent with the top of the Association for Science and Environmental Protection in Al-Manea, life returned to the present old dead lake about 20 years ago after the establishment of the Hassi Tawil agricultural area on National Road No. 01 towards Tamimoun, thanks to the water leaking from the irrigation and naturally draining into this depression thanks to the permeability of the soil. Discovering that migratory birds take Lake Mashkardel as a secure place to resort to just in case they're endangered in Lake Hassi al-Gara. The newly discovered lake will undoubtedly contribute to solving the sewage problem of the new city of Manea, because the sandy plaster pockets in it'll absorb organic matter suspended within the dirty water And it works to filter the water to then collect the clear water in Lake Mashgardel without the necessity for a filter station. it'll also prevent the lake from creating stagnant swamps that emit poisonous insects and pathogenic germs. In sum, the location of Lake Mashgardel is extremely important for human health and therefore the preservation of biodiversity within the region. It achieves a natural imbalance within the area 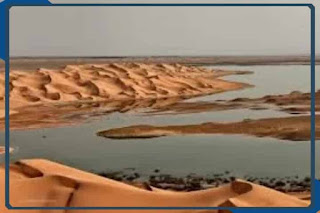