"Sexo", "food", "barbosha", "grace", are different expressions for one and multiple dishes at the same time in terms of the forms of preparing "couscous" and cooking it between this region and that of the vast territory of Algeria.  Round flour, the latter preferred by many Algerians, is eaten on Fridays, and an Algerian family's lunch is rarely without this inherited dish, which is mostly cooked with meat or chicken broth, accompanied by potatoes and other vegetables. 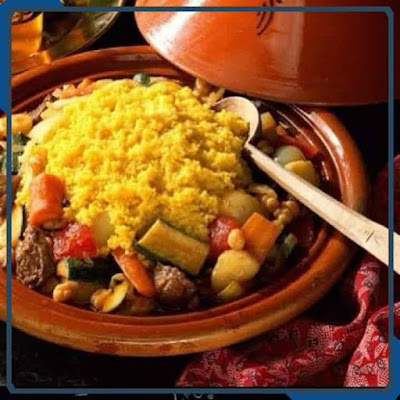 The Algerians share in gving them the couscous dish, the popular food, a first place in their tables of joys and sorrows on various occasions and even without them.

Researchers define couscous, the popular food, as a Berber food dating back to the period between 238 to 149 BC.  Dry legumes such as chickpeas and beans in some cases, as well as vegetables of all kinds regardless of meat, which gives the dish a balance that indicates the extent to which the ancestors are informed in the field of achieving nutritional value based on the employment of the food available to them, and the benefit of wild and local herbs that are added to couscous broth, especially in  Winter season, just as herbs reduce the intensity of used spices, as well as fulfilling the demand for taste and texture.

Couscous, the popular food, is from ancient times at the dawn of history, as evidenced by the pottery, especially the couscous pots, in addition to the drawings discovered on the pots, which were found in the North African region. 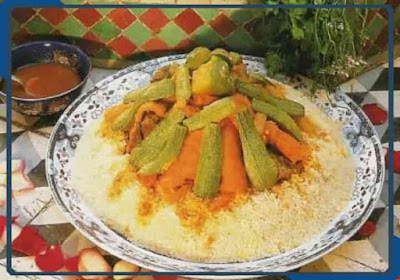 Couscous, the popular food, is prepared by bringing: 1 kilogram of couscous, in addition to half a kilo of meat or chicken, 6 potatoes and a tomato, not to mention a quantity of oil, spices and seasonings of pepper, parsley and garlic, then cook the food by steaming it about three times, while  The broth is cooked alone, and there are those who dispense with the broth and use eggs, raisins, as well as milk.

Couscous, the popular food, harmonizes with the nature of each region in Algeria, adapting as a wonderful synonym for the traditions of each region and its social and food rituals.  It is hardly mentioned except in conjunction with the name (Al Mehwar), which is a couscous dish with white broth, boiled eggs and lamb, while other regions tend to keep up with the couscous with famous traditional pastas such as “barley couscous”, “Al-Shakhkokha”, “Eesh”, “Brakoux” and  the obscured." 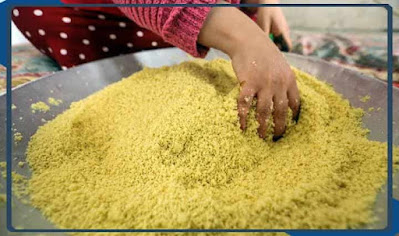 Couscous is a popular food in many areas of the Algerian desert, by adding a few dates in the broth, which removes the bitterness of the spices and helps in the quick cooking of meat, which made one of the chefs repeat, "Destiny without dates is like a woman without a mind", which is an old proverb used to  The inhabitants of southern Algeria circulated it to confirm this meaning in their social environment.