A sprawling desert, stretching within sight, in the middle of a desolate Beida, an ancient archaeological city is stored in its hollow, which includes palaces, surrounded by green gardens in the past era, in the middle of the towering palm oases, all of which form the ruins of “Esdratan” or “Sedrata”, located in the south of Algeria,  Expressing the story of man's challenge to the tyranny of nature and his adaptation to it. Accompanied by a number of residents of th city of "Wargelan", which is called administratively Ouargla, located 800 km south of the capital Algiers, to the vicinity of the ancient city hidden in the sand dunes, known in the desert region, and for centuries, it was a bustling metropolis, which grew in the desert desert.As we got off the four-wheel drive cars, the preferred and approved means of transportation in these quarters, the view of that wide, flat desert came to us.  We had moments of amazing calm and silence, we felt that unique calm, due to the absence of manifestations of life and the lack of movement in the atmosphere.This image on the faces of any visitor to the city, which is about 14 km from the center of Ouargla, did not initially express the essence of the place and its truth, as if it tempted him, until he arrogantly steps inside, motivating him to reveal more of its secrets. As usual for these unique landmarks, the curious coming to the place is required to be armed with a wide knowledge of the secrets of the desert metropolises. "Esdraten", as the Berber residents of the city insist, on naming their ancestral settlement in the past, is still a matter of curiosity for researchers, especially foreigners, and orientalists among them, who loved it and excavated in its landmarks.

The successor to "Tehrt" The historical writings considered "Sedrata" one of the largest Algerian cities in the Middle Ages, and distinguished it, with its unique character in the middle of that vast desert, with its unique urban features, and its gushing water from the sands of the desert.Many accounts go to the fact that the "Rustamimen, Berbers, Ibadites" contributed to the construction of these palaces, after the destruction of their capital, Tehrt (northeast of the capital Algiers) by the Fatimids, at the beginning of the last millennium.For years and decades, the city remained a mystery to researchers and those interested, with a few, who originally denied its existence, considering it, as a mere legend, a figment of the imagination of the narrators, and others were more conservative, they did not deny the existence of the city, but they acknowledged its final demise. In determining its history, researchers referred to stone tools that they found in the area extending south of Sidrath, and considered them as physical evidence that the site was known during the post-Stone Age and Neolithic period.

With the refusal of a group of researchers to acknowledge the existence of a city called “Sedrata” or those who claimed its final disappearance, the residents, and the people of the region, maintained their firm belief in its existence in their surroundings, but they were unable to provide clues and evidence to support their story.Her hidden location, in turn, was a discouraging factor in proving the accounts related to her, and obtaining evidence to support what the enthusiasts go to was an additional obstacle to the above.The orientalists were confident, unlike the skeptics, of the accuracy of their information gleaned from historical sources, and they proceeded to excavate in search of clues that would lead them to unveil the mystery of the city.Researchers such as John Letio considered that the founding of the city dates back to the beginning of the first Hijri and seventh centuries AD. He tells that some Muslims settled in Nafusa Mountain, then some of them headed to Wadi Mieh because the area was known for its prosperous commercial activity.  He added in one of his books: Whatever the case, through the caravans coming from Zanzibar and the Blacks, the region turned into an important commercial center, and these data remained without firm support or clear evidence confirming these trends and facts.The absence of capabilities, the lack of a firm will, or the harnessing of means, were all factors that made it difficult for researchers to reach facts, or to reach "Sedrata", which began to turn into a myth over time.

With the arrival of the French forces upon their occupation of Algeria, to the south of the country, and the storming of the Wilayat of Ouargla, the city became the focus of the attention of a number of researchers and travelers, who flocked to various regions, searching and excavating, for treasures of knowledge that remained for eras obscured, buried and kept secret.  "Marguerite". Each of them had a cumulative contribution to bringing the city to light and highlighting its importance, richness and wealth.

Foreign researchers were armed with clues and testimonies that they had due to their availability of some capabilities, and their firm belief in the accuracy of their historical information, and their arrival, after years of research and excavation, to gradually discovering the ruins of the city. The residents of the region were happy after reaching the depth of Sedrata, the city that was filled with desert sands, obliterated all its landmarks, covered its buildings, swallowed up its palaces, with the treasures and antiquities they contained, and kept the secret for decades and centuries.  The researchers set out to complete the excavation work, in an effort to remove the sand from its main features, and to determine its precise location and its total area.On an area of ​​about two square kilometers, the explorers found a group of buildings, in the midst of hills ranging in height from 140 to 150 meters, surrounded from the south and southwest by a series of mountains, which acted as a defensive strip that fortified the sides of the city.

The establishment of Sedrata in this site illustrates its defensive nature, and its being a refuge for the people who fled from the wars they experienced in Tehrt, which was annihilated by the nomadic tribes. The people focused on the construction of the city walls on flat, difficult-to-road surfaces with a lofty height that is difficult to break into from any side.

These natural features, which are manifested in the site's presence at the crossroads of trade caravans, were the main reasons that helped to stabilize human groups and the emergence of a sophisticated civilization, the effects of which are still visible.The residents of Ouargla organize annual visits to the city of Sedrata in the spring, and organize a popular festival attended by everyone to remember the history of their ancestors, approach the ruins of their metropolis, stand on what remains of them, and steer clear of ruin, inspect the landmarks from which the sand was removed, and draw lessons and lessons from them.  .These visits are considered a challenge, and a cry issued annually by the residents appealing to the authorities to stand firmly in the face of the sabotage operations that affect their city, which is subjected to a real obliteration of its landmarks, looting of its surroundings, and expansion at the expense of the place, which is classified as part of the memory of the residents of the region.She left with the evening breeze, and before the sun’s disk faded from the sky of “Wargelan” around the city of “Sedrata” and hidden voices and groans crept from the depth of the sand, which still contains in its folds the secrets of strong men, who volunteered the desert, patiently, and patiently, and settled in a desert, they turned it  Gardens around which eternal rivers flow.It was clear that these sounds were the groans of those who lived in the place, as he recalled the state of his land before the mob invaded them, and destroyed water wells, and sources of drinking, the main source of people's livelihood, and their settlement of the place to turn the present into a barren desert.We felt that hidden soliloquy of the people who lament the state of the old days, when it was. 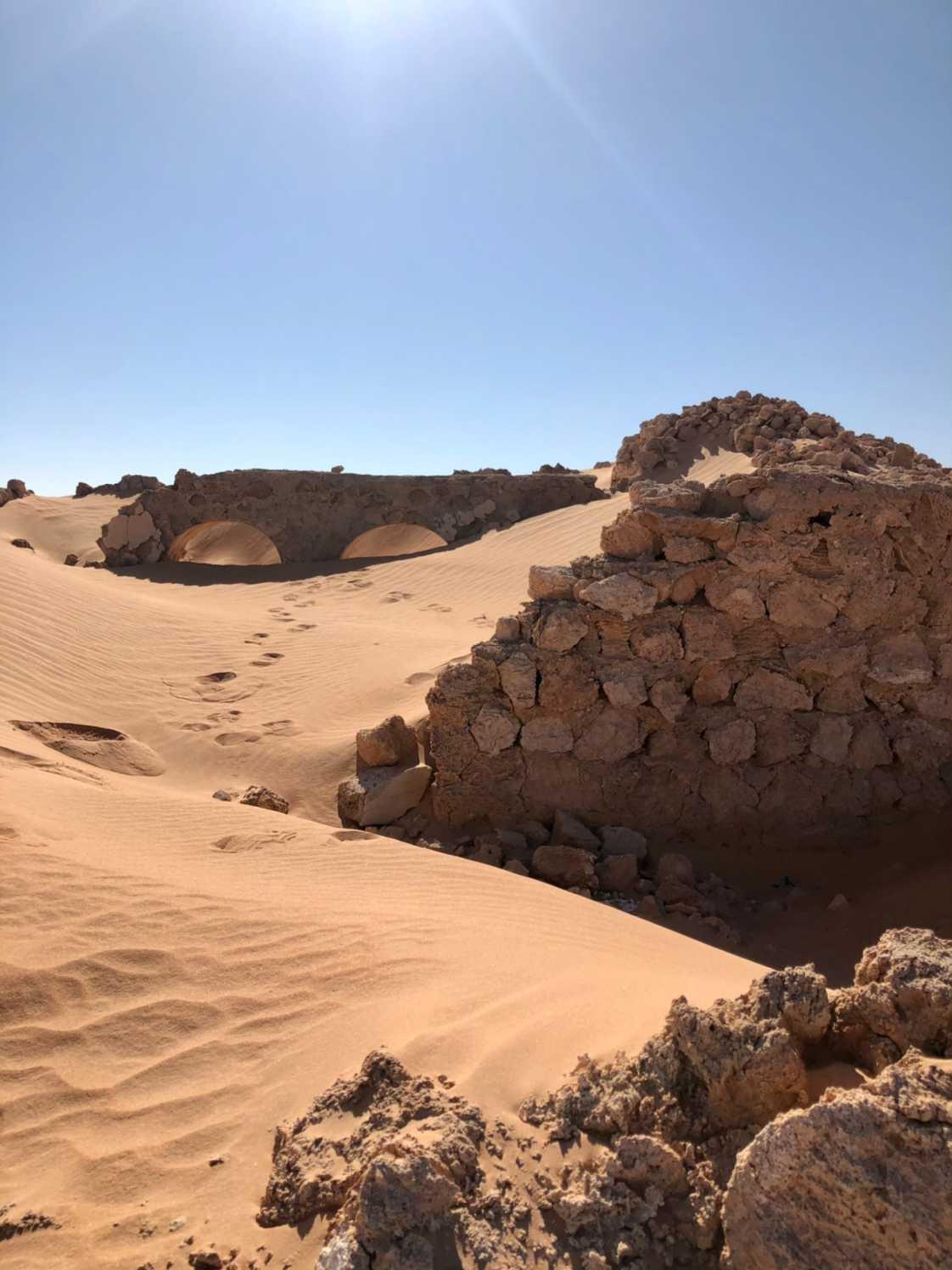