Many archaeological sites have been found in the prehistoric state of Ghardaia, in southern Algeria, through rock inscriptions, some funerary monuments and ancient caves located in the foothills of the mountains, in addition to the historical palaces built by the Zenata tribe, where they inhabited the M'zab Valley in the seventh century AD.  As some historical accounts indicate, most of them were built on the banks of the M’zab Valley course and the surrounding mountain hilltops. Beginning in the tenth century AD, the circumstances changed, and the palaces of the M’zab Valley, which are now known with their distinct geometric shape, appeared, and other palaces appeared outside the gutter similar to my palace (Limbartakh and Lahmar Balqarara and Agram).  Taourirt in the impenetrable).

The palace (Agram Taourirt) is located 270 km south of the city of Ghardaia, in the eastern side of the city of Al-Manea in the (Lamadi) district, at a distance of 1 km from the city center.  Most historical sources say that it was founded in the tenth century AD.  The palace was built in a tight manner on a strategic mountaintop, for security motives that ensured its protection from the attacks and campaigns that it was constantly subjected to by the invaders seeking to seize the area.

It was inhabited by some Berber merchants, and some Arab tribes of travelers frequented it, as the region links the regions of the north and the south and its direct contribution to the trade and cultural exchange of the southern region.

According to historical accounts, the ancient inhabitants and founders of the palace are from the clan (Al-Khafian) and they are from the Amazigh Zanata tribes coming from the Timimoun area in Al-Qurara.  A Sultana named Mubaraka Bint Lettus also lived in this palace, as some historical accounts mention that her origin is from the Far Maghreb, and due to the temptation that occurred to her, she settled in this palace (Taourirt). 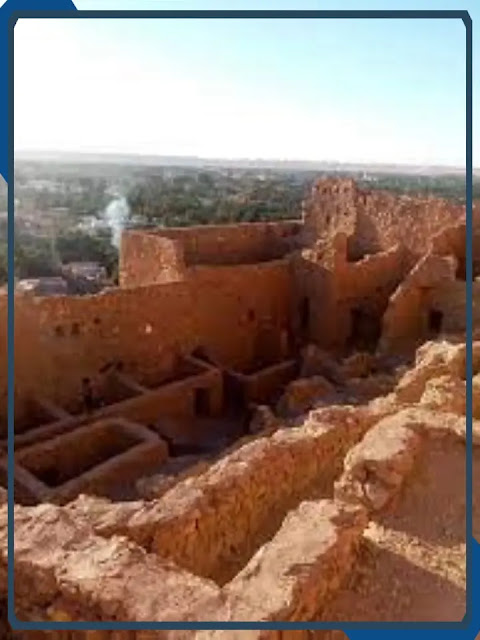 Al-Manea Palace was classified as an ancient “archaeological site” as a national heritage in 1995. It is visited by visitors from various sides and serves as a source of inspiration for artists, poets, writers and painters in the region.  It must be preserved.