The forgotten city in the depths of the Algerian desert They call it: (The Gate of the Jinn, and the Eighth Wonder of the World).

Many mysteries surround many places around the world, some of which are hovering around legends, and some that have been explored, but its complex mysteries remain something that many cannot solve!!

Perhaps Algeria is on the throne of that list because it includes many places and picturesque islands. 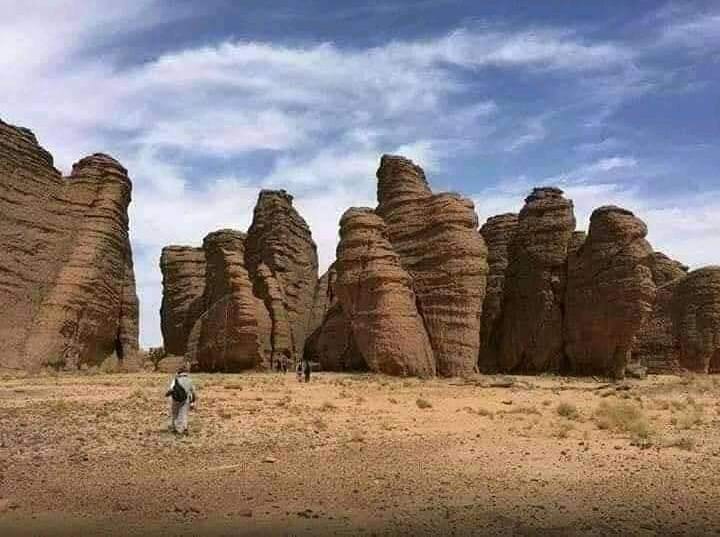 Among those mysteries is the Algerian city of Séfar, which the residents nickname: “The Gate of the Jinn.

It has been called "The Eighth Wonder of the World"

It is also known as the largest gathering place for witches and demons in the world.

They consider it the second most dangerous place in the world after the Bermuda Triangle because of the presence of a large magnetic force in it.

The United States of America said: All the triangles [Bermuda Triangles] are in the sea, except for one triangle found in the Algerian desert.

There is also talk that it is the lost continent of Atlantis. They said that it has the largest fresh water reserves in the world.

It is said that it has the most beautiful and splendid sunrise and sunset on the face of the earth.

About the city of Sevar:

It is located in the Tassili n’Ajjer mountain range, which means “River Plateau” in the middle of the Illizi desert. It represents one of the oldest civilizations in the world. It contains a museum of drawings and inscriptions dating back more than 15,000 years. UNESCO classified it as the oldest and largest rocky city in the world. Its area is 89,342 square kilometers.

A city in the far south of Algeria, in the vast Algerian desert, estimated at about 20 thousand years old, is a forest of rocks covered with yellow and brown sand, has a charming attraction in the morning and even in the evening under the light of the moon and stars. No one was able to enter it or discover it in its entirety, only a few parts of it, and whoever entered it did not come out alive from it, and the Algerian army protects it and prevents entry to it, although even if it is available, no one enters it, and all the published pictures of it are only for some Parts of it, and the second French channel made a program about it, the material of which was filmed by a drone, and no one risked his life. 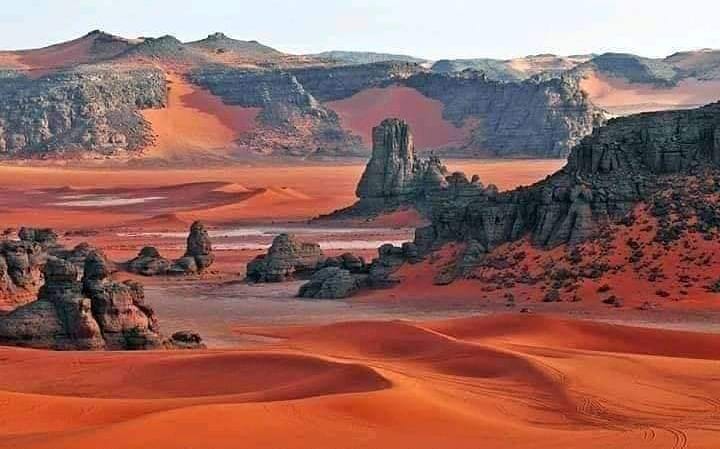 The only one who entered it was the greatest magician in human history {Alastair Crowley} and the team that entered with him all died except him, and years later he died he also left a document in which he drew lines and drawings incomprehensible and not one of the magicians was able to interpret it [the document is in a museum in Britain]

It was called the city of the jinn or the city of stones, and was classified by UNESCO as the largest stone city that includes the largest number of caves and caches in the world, and the drawings on its walls describe the modern and advanced human lifestyle, and creatures that fly in the sky wearing flying tools, and diving equipment for people swimming in the water, describing A sequence of climatic changes and the biodiversity of plant and animal organisms, at a time when modernity and technology had not reached the world.

The inscriptions are described and dated:

The inscriptions drawn on the rocks of this city vary. Some interpreters say that they are ancient inscriptions that were before humans came to Earth, drawn by jinn or aliens who came from outside the globe and communicated with humans and painted them (of course, according to their claim)!! The inscriptions vary between human, animal, plant and even space. They also describe images of humans, their body and clothing in previous eras, and drawings of animals and plants that lived at that time. Through these drawings, the visitor can track the change and vital difference and how to resist and adapt to the difficult desert living conditions, in addition to The drawings were combining more than one type at the same time, including tropical, desert and Mediterranean, all collected in one city, which raises the astonishment and surprise of the visitor about the nature of the people who drew them and the nature of their living and movement.

The most strange thing in those drawings is that they embodied human creatures flying in the sky wearing what resembles flying devices, and men wearing diving equipment, some of them drag mysterious cylindrical objects, and inscriptions of ships and astronauts, at a time when he did not know anything about the current technology!!!

The European mission that visited the city and prepared a report on it, found that the city contains a reserve of fresh drinking water, and the most important thing that the drawings show is that the area was wet and a large number of residents lived in it before natural changes forced them to migrate the area, which turned with the passage of time into a barren desert. erhaps the city bears many mysterious puzzles, and that the way to build it is complex and difficult, so whoever enters it cannot get out of it, as it is a larger and more complex city than the pyramids, so many researchers have concluded that what was written about the city of Sevar is closer to the legend than to reality, and the researcher confirms And the Algerian architect, Dr. Atef Ahrez, said that “what the region contains in terms of artistic and historical treasures, this is not considered a fantasy, but rather a visible and tangible reality.”

All of the theories and hypotheses that have been put forward may be true as well as possibly wrong!!

As for myths and legends, it is difficult for the mind to explain!!