Known * Al-Ghout * in the Wadi Souf region located in the southeast of Algeria, which is an abyssal depression between sand dunes, with a depth of 40 meters and a diameter of 80 to 200 meters, dug by farmers.  Water from the aquifer without being irrigated by the farmer, and this process was known in the region by the (bali) method, so any citizen in the old Wadi Souf region can plant palm trees in the ghetit and travel to work in another remote area, so his palm does not need watering, and returns to it in the spring for its pollination and in  Autumn to reap its harvest.  The process of creating al-Ghout is done by raising sand on the back with a caddy or by donkeys and mules, which is a very tiring and strenuous process, but the parents and grandparents, with their determination, found them and their love for the land and the reconstruction of the region, created the ghetto, which is the pride of the region and evidence of intelligence and challenge. It is an agricultural pattern specific to the Wadi Souf region, which was adopted by the World Food Organization “FAO” as a world agricultural heritage in 2009. Where do you imagine in your mind while watching these sands that you are in front of a green paradise in the middle of the golden sands, and the beauty of this scene increases at sunset or sunrise,  Where you see it among the palm trees and inside the dunes, so that the “FAO” organization classified it as a tourist attraction that means support due to its scenic beauty, in order to save the wealth of the upturned pyramid palms, as European travelers called it, from being lost. The palm oases located in the depth of the desert were, as recently as the seventies and eighties, the destination of dozens of foreign tourists, because of their natural beauty because palm cultivation depends on traditional methods, and there is no trace of any machine or electricity, and there is only a simple traditional primitive life He is the old Soviet man who digs a basin with wide extensions of hundreds of meters in length and width, and its depths reach 40 m.  From the flatness of the earth and its proximity to the water.

It is the basic process when starting to complete a new Ghout or during the expansion of an old Ghout, and the owner of the Ghout continues this process himself or hire workers called “Al-Ramalah”, and they use in their work Al-Qafwa, Al-Zanbeel, Al-Abana and Al-Makra. 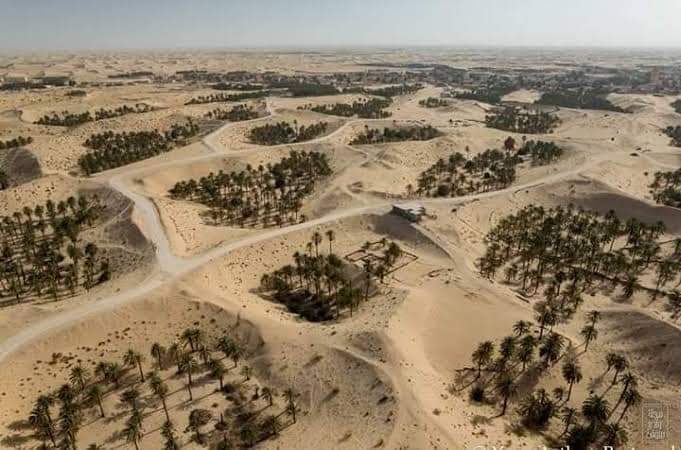