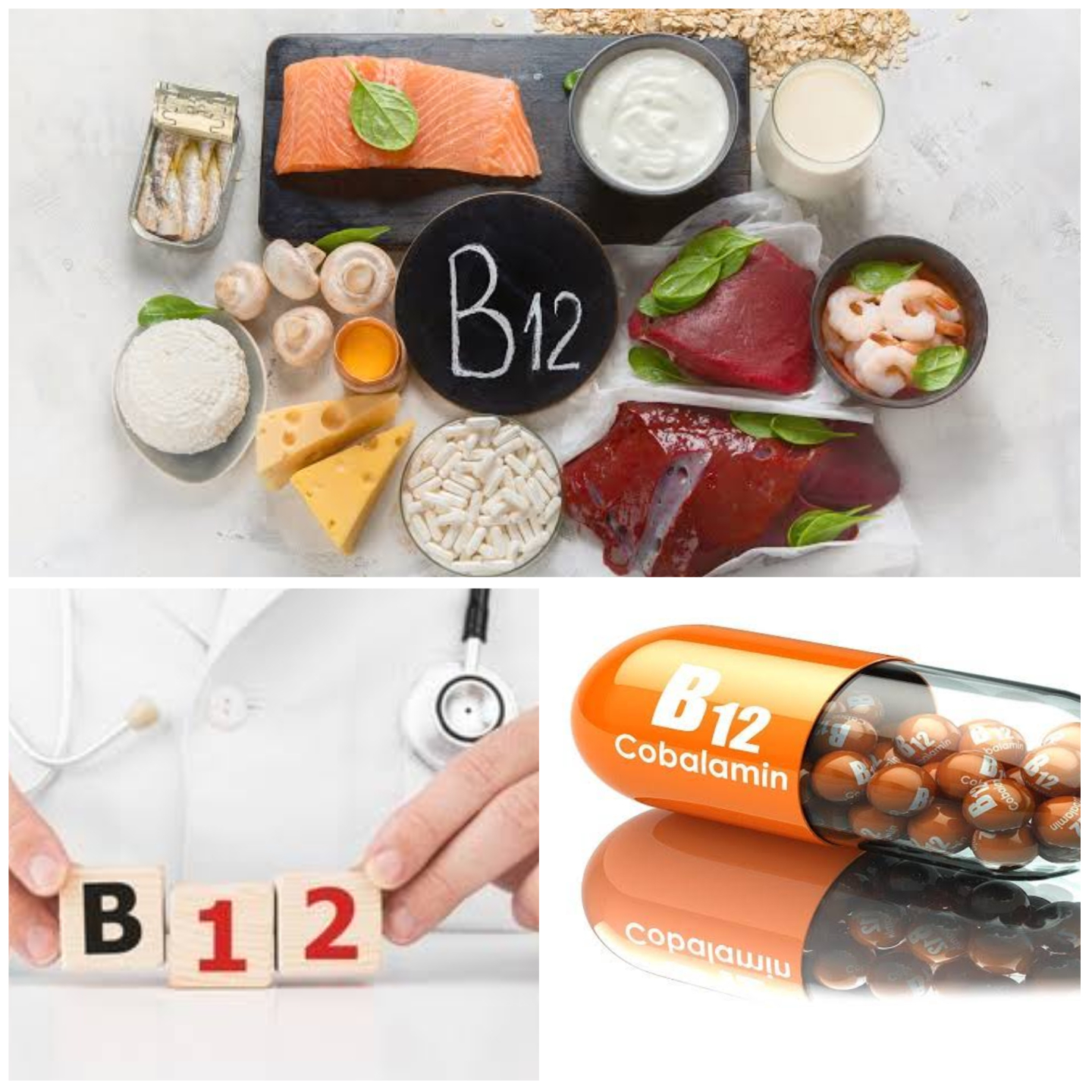 useful and beneficial:12 Signs and Symptoms of Vitamin B12 Defici

12 Signs And Symptoms Of Vitamin B12 Deficiency That Shouldn’t Be Ignored Vitamin B12, otherwise known as Cobalamin, is a water-soluble vitamin that has an important role in our bodies. It’s involved with everything from red blood cells to DNA, and it even helps our nervous system function properly. A source of B12 is available from a number of foods such as meat, fish, poultry, eggs, and dairy. If you’re vegan or vegetarian, you’ll find B12 in some fortified dairy alternatives. B12 deficiency is commonplace today, especially amongst the elderly. If you don’t get enough B12 from your diet or if you can’t fully absorb it from the foods you eat, you could be at risk. Keep watching and you’ll discover the signs of vitamin B12 deficiency.

Number 1 - Pale Or Jaundiced Skin Having a pale complexion can signal a B12 deficiency, especially if the person has jaundice, which is a yellow tint found in the skin and whites of the eyes. Insufficient B12 interferes with the production of red blood cells, jaundice is one of the results of that. The DNA that’s needed to make red blood cells depends heavily on B12. Without it, The DNA misses out on crucial steps in this process, producing red blood cells that are incapable of dividing. The end result is known as Megaloblastic Anemia - in which the red blood cells created in your bone marrow are too big, also making them much weaker. Since these red blood cells are so big, they never make it out of your bone marrow, and are not circulated around your body. As you have a lower number of red blood cells in circulation, your skin takes on a pale tone.

Number 2 - Skin, Hair And Nail Problems Vitamin B12 is not only important for the production of blood cells, but it’s connected with your skin, hair and even your nails. A lack of it, therefore, will have an unfavorable effect. Like I mentioned in the previous point, B12 deficiency can cause yellowing of the skin - but unfortunately, it can go even further. In fact, it can even lead to vitiligo, a disorder that leads to areas of your skin having white patches. Acne, dermatitis, hyperpigmentation, and even skin lesions can be caused by a B12 deficiency. Your hair’s health can also suffer, with your hair turning gray earlier and falling out, and fingernails becoming brown-gray in color.

Number 3 - Sensations of Pins And Needles A prolonged lack of B12 can have one major ramification; nerve damage. B12 is intricately linked to your metabolic pathway helping to produce Myelin, a fatty substance that insulates and protects nerves. A long-term deficiency of B12 means that the Myelin that your body makes is subpar, hindering the function of your nervous system. The feeling of pins and needles in your hands and feet - known as Paresthesia - is an indicator of this. Most people are known to experience Anemia in tandem with the neurological effects of B12 deficiency. Yet this isn’t always the case; a certain study even discovered around 28% of people who experienced neurological symptoms of B12 deficiency, didn’t show any indication of Anemia. It’s important to remember that ‘pins and needles’ is a common symptom that people can experience for a number of reasons, and is not a ‘guarantee’ of a B12 deficiency.

Number 4 - Changes To Mobility If an ongoing lack of B12 is left unchecked, your nervous system could be so ill-affected that the very way you move is compromised. Your coordination and equilibrium may even be hampered, boosting your risk of falling. Those belonging to the over-60 age group often display this symptom, as people in this age are heavily predisposed to having B12 deficiencies. It may still be possible to correct this with treatment, strengthening mobility. The elderly isn’t the only group affected though; younger people can have an acute shortage of B12 which affects them similarly.

Number 5 - Glossitis And Mouth Ulcers Glossitis refers to an inflamed tongue, which can arise due to a lack of B12. When affected by Glossitis, the color and shape of your tongue are altered. Your tongue turns red, swells and becomes sore. The taste buds on your tongue also change, as the coverings elongate and disappear. This impacts how your tongue looks, giving it a smooth appearance. Glossitis also heavily effects your way of speech and eating habits - due to the pain it causes. Other oral discomfort can be experienced as anything from mouth ulcers to an itchy feeling in the mouth.

Number 6 - Breathlessness And Dizziness Since B12 deficiency can make you Anemic, this in turn, may make you feel dizzy or experience shortness of breath, particularly when you expend a lot of energy. This is due to your body’s lack of red blood cells, meaning your other cells are getting an inadequate supply of oxygen. That being said, there are many reasons as to why you might be feeling overtired or out of breath, so it’s best to consult a doctor. Number

7 - Muscle Weakness Have you been having a lot of off days at the gym? Maybe the groceries seem heavier than before? This is another potential sign of a vitamin B12 deficiency. B12 oxygenates your muscles and organs, helping them perform more effectively. The less oxygen your muscles have access to, the more likely they are to underperform. This leads to overall weakness - and even going for a walk can feel like too much to face. If you notice a sudden uptake in your instances of weakness without a definite cause, you may want to book an appointment with your doctor, in order to look at your B12 levels.

Number 8 - Disturbed Vision If you’re experiencing unusual problems with your eyes, such as blurry vision, it may be due to vitamin B12 levels. As I mentioned, B12 deficiency can cause damage to your nervous system - this can also affect the optic nerve that’s connected to your eyes. The result is Optic Neuropathy, a condition in which the nervous signal that makes its way from the eye to the brain is disrupted, diminishing your eyesight. All this sounds very scary, but the treatment is simple: administer B12 - which usually undoes the damage.

Number 9 - Mood Changes Those who experience low B12 levels, usually describe it as altering their frame of mind. It’s also not uncommon for issues, like depression or dementia, to be connected with insufficient B12. One proposed explanation for this, is the “HOMOCYSTEINE HYPOTHESIS OF DEPRESSION”. What this theory proposes, is that the rise in your homocysteine levels - which is the result of inadequate B12 - may be harmful to brain tissue, hindering the efficacy of signals sent to and from your brain, leading to mood changes. A number of studies infer that in some cases, where the patient is lacking in B12, giving the vitamin as treatment can overturn these effects. Conditions like depression or dementia can have varying reasons for affecting a person and as such, the effectiveness of supplementing with B12 in these situations is unknown. Taking a B12 supplement if you have low levels may improve your mood, but it can’t take priority over proven medical therapies used to treat depression, dementia, or mood changes.

Number 10 - Stomach Discomfort Or Infrequent Bowel Movements If you’re find yourself dealing with constipation or stomach pains, it may not be down to what you had for lunch. Vitamin B12 helps your red blood cells function and it aids in the creation of hemoglobin - a protein used to transport oxygen in the bloodstream. A B12 deficiency may result in Pernicious Anemia - in which your blood can’t transport the necessary oxygen to your tissues, resulting in anything from diarrhea to nausea, or even problematic bowel issues.

Number 11 - Heart Palpitations Pernicious Anemia, like I just explained, is one result of B12 deficiency. But this type of Anemia affects more than your digestive system; it can lead to heart palpitations. Whenever your heart beats at a greater speed than 100 beats per minute you may feel the palpitations coming into effect in your throat, your neck or your chest. This can also happen when you have an early beat. Anemia creates a lack of oxygen in the bloodstream, as red blood cells and hemoglobin are under-produced. The result of this, is that the heart has to try and make up the difference, pumping hard to get as much oxygen as possible around the body - the fallout being the palpitations.

Number 12 - Unexplained Fatigue Sometimes, even after a night of restful sleep, you can spend the next day feeling like you want to jump right back into bed. Now, this is understandable once in a while, but if this feeling last for days

- despite a consistent sleep schedule - this tiredness (mixed with other symptoms) could be signalling a vitamin B12 deficiency. Researchers say that if someone feels worn out, even in the face of a full night’s sleep, the odds are they’re dealing with low B12 levels. This is down to insufficient red blood cell production, a process in which B12 is instrumental. Low red blood cells mean less oxygen transported to your organs, leading to the organs underperforming and boosting your feeling of fatigue. Vitamin B12 deficiency is not uncommon, and comes in many forms - making it hard to pin down

- which is why you should ask your doctor for help. Pernicious Anemia or the inability to absorb vitamin B12, means that you will need to be treated with shots of B12. These shots may continue, or could change to a high-strength oral supplement, or even take the vitamin nasally. Older adults with the deficiency will have a higher need to stay on the vitamin, either taking it by itself or as part of a multivitamin. Treatment should be the solution for most. But unfortunately, if nerve damage has occurred because of the deficiency, it may be permanent. The good news is, that a B12 deficiency is easily preventable by eating enough meat, dairy, eggs, and poultry. If you’re a vegan or vegetarian, the solution can be to take a multivitamin or B12 itself; or to consume fortified foods or supplements that use B12. Have you ever had a vitamin B12 deficiency? If so, how did you solve the problem? Were you able to bring up your levels with supplements? Or did you have to get shots? Share your experiences below! Thanks for watching!